How Suite It Is

Bowling, like any other industry, has journeyed plenty into the realm of luxury. Hip, glitzy centers date back to the days of the Rat Pack in Las Vegas. Private lanes have long been found in the spare rooms of the wealthy. Even Nixon added an alley to the White House basement.

For customers who remember the days of outdated décor and a smokey haze in the building, the atmosphere and offerings of today's bowling centers are impressing even the most discerning patron. Look at the landscape now and you will see an ever-expanding focus towards the higher end. VIP lanes, private suites, and other luxe areas are becoming as everpresent in centers across the country as vending machines and rentable footwear.

“We wanted our guests to be able to have more of an upscale bowling experience,” said Lauren VanBuskirk, director of marketing for Stars and Strikes, which features VIP areas in 13 of their 15 southeastern locations. “People walk in and see the curtained-off area and the fancier lanes and think, 'Oooh, I want to bowl over there.'”

VanBuskirk and other operators like her are seeing the benefits of specialty spaces, both in their bottom lines and in the eyes of their customers.

“This is something that's unique, that separates us from a lot of our competition,” said Jessica Doty, vice president of operations for Andy B's Entertainment in Denton, Texas. “Customers love the upgraded experience. It definitely gives them the feel of being special.”

“We go above and beyond to ensure a wonderful experience, from proper ball fit to shoes delivery to the lanes and have their names already in the scoring system upon arrival at their lanes. The guest gets the ultimate Very Important Bowler - VIB- treatment.”

It would have been unheard of not all that long ago to turn even a small number of lanes into reservation-only areas. Any decisions that took space away from league bowling would have risked not only alienating the regulars, but also creating potentially unfilled lanes and, thus, unrealized profits.

Fast forward to today, though, with the reduced numbers of active league bowlers (especially in the wake of pandemic influenced restrictions and tightened budgets), and it makes much more sound business sense to cater to parties, corporate events, and groups looking for a more exclusive experience.

“As the years went by, you saw the leagues declining. It was nothing that we did, it was just society, the way things evolve,” said Anthony Taormina, president of Our Town Alley in East Norriton, Pennsylvania. “We realized that we didn't need 50 lanes anymore, we could use the square footage for other things, other revenue sources. And one was to put in a 6-lane boutique area.”

Approaches vary, depending on layout, available capacity, and customer demographics. What works for new, expan- sive family entertainment centers will not necessarily apply to a 50-year-old bowling alley looking to modernize its operation. But the key elements are the same: a space separate from the rest of the enterprise, a different (and typically more modern) décor scheme, and special offerings unique to that area, whether they be dedicated service, fancier food and beverage choices, or deluxe entertainment options.

For a center like Big Al's in Meridian, Idaho, that comes in the form of their 12-lane Slider Alley VIP Lounge, with its plush seating, novelty balls, and massive, four-lanes-wide video screens.

At Spins Bowl in Wappingers Falls, New York, groups can reserve their event space with customizable party options, including their choice of seven specialty lanes, access to arcade gaming, and a host whose role it is to keep the fun going.

In Naples, Florida, guests who snag a spot in the HeadPinz VIP area are treated to high-tech, glowing lanes on which they can play HyperBowling, a wild variation on the norm that features color-coded multipliers and an escalating scoring system. 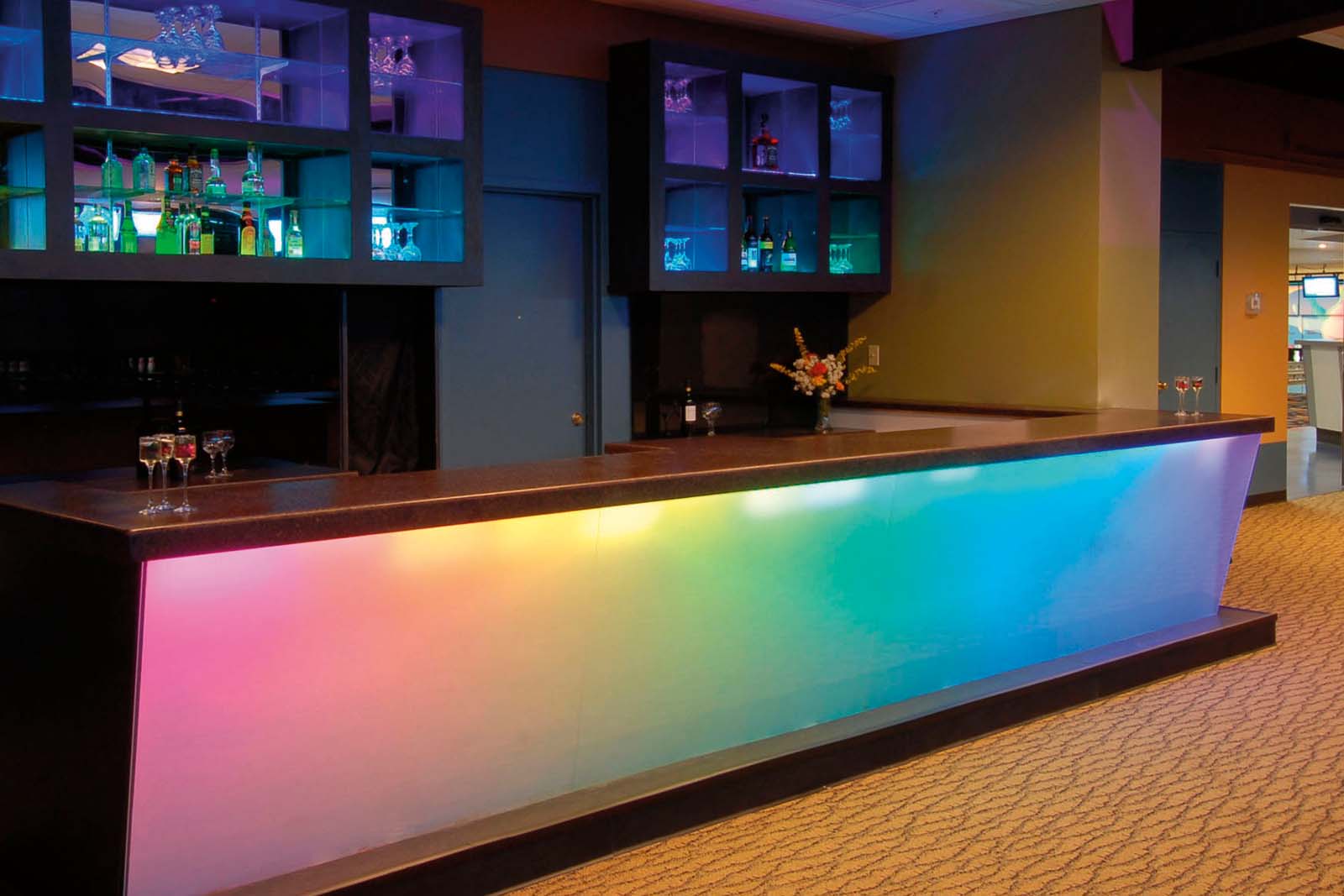 Beyond establishing more opulent opportunities for patrons that allow them to stand out in their communities, managers are also finding that the added flexibility is a big boon for their businesses.

“We rarely say no to any events. Being versatile and keeping an open mind about the space has been critical to our success,” said Pam DeMarce, owner of the Wow! Zone
in Mankato, Minnesota. “Our community looks at us as a community facility, and we're extremely proud of that.”

DeMarce noted that over a weekend, the event space at Wow! Zone was slated to host a wedding reception (and its morning-after breakfast, the next day), a 1976 high school class reunion, and the players and coaching staff for the Wayne State University football team, in town to play a game against Minnesota State University that Saturday. “A lot of it is about the appeal of the VIP lanes, sure, but it's also really about just using your facility smartly,” DeMarce added.

Whether it factors into the plans for a newly constructed center or into the decision to renovate or expand an existing one, adding these areas is simply part of keeping up with the way the industry has evolved.

Taormina noted that in his research for the renovation of Our Town Alley, he came across businesses that had stripped out entire lanes just to add usable space in interesting ways. He was inspired by those places to add a bar at his establishment that runs the length of the approach area to the pinsetters, where lanes 1 and 2 used to be.

Overall, Our Town converted eight existing lanes into six VIP lanes, plus the versatile bar setup, as part of their plans, along with updated finishes, scoring systems, and LED lighting that can reflect onto their new white lanes. “It took the league bowlers a little bit of time to get used to it, but once they realized they could bowl a 300 on white lanes just like any others, they were fine,” he joked.

For many operators, the addition of these elevated spaces also gave them the freedom to experiment with new formats and games that keep customers coming back.

Stars and Strikes, for example, introduced SPARK Augmented Reality bowling to their VIP zones, which projects colorful, interactive elements onto the lane surfaces and allows bowlers to play Angry Birds, roll balls over images of themselves and their opponents, and try out a different game type with each visit. 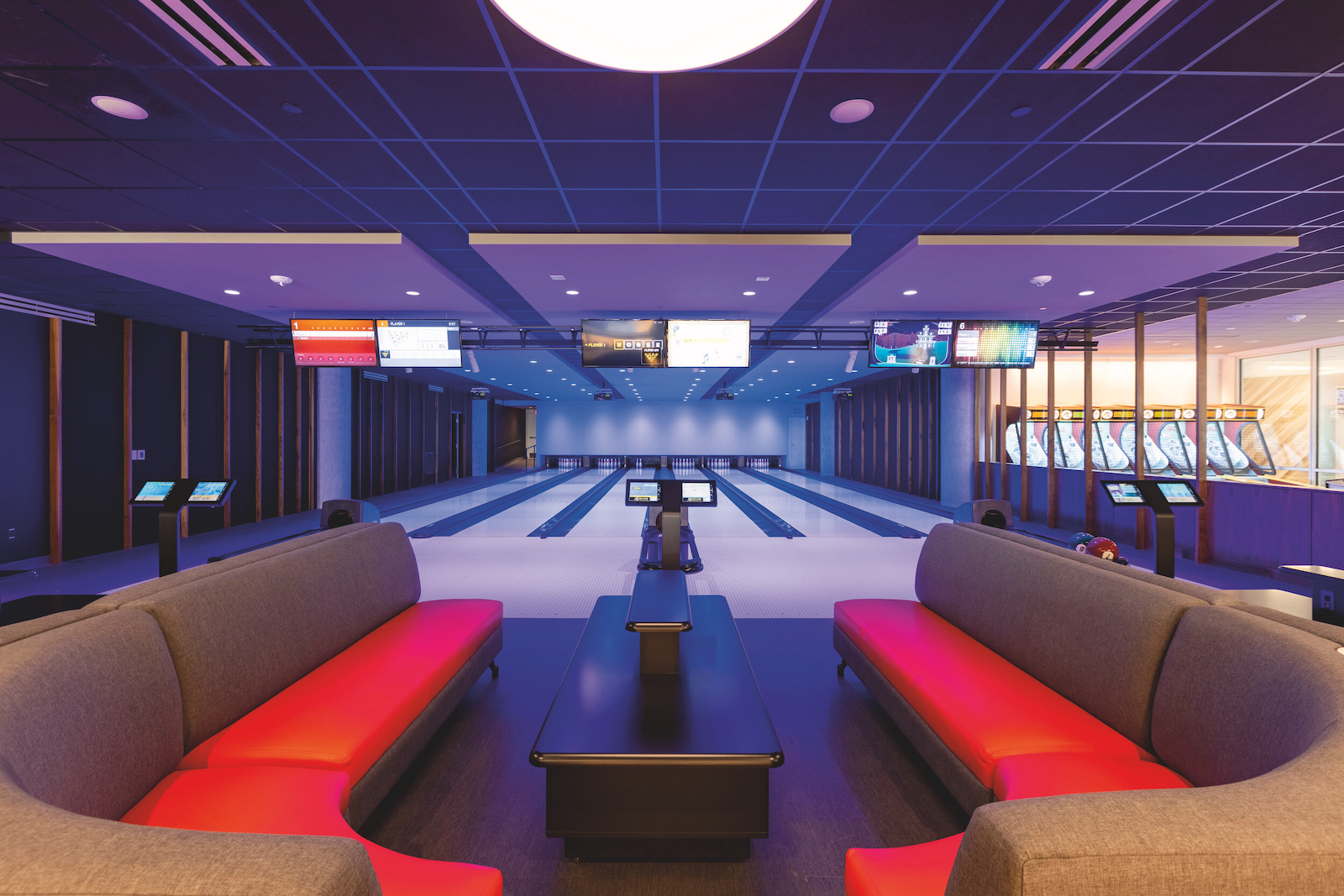 That added curiosity factor can quickly become a revenue driver, with open bowlers who see the space wanting to upgrade their night out.

“You do get a jumpstart on profitability once you get the space established because of the added flexibility, on top of the fact that you can charge more for the activities that happen there,” said Wow! Zone general manager Allison Jennings.

While expanded marketing efforts are nice to initially get the word out about these new rooms, many administrators expressed that simply seeing the space or hearing about it from friends was enough to convert customers to the VIP life.

“We lean into our social media and email marketing, of course, and we have video and TV spots, but it's really become a 'you have to see this in person' experience,” said VanBuskirk. “So we encourage our counter team to walk people over to let them try it out for themselves.”

“We haven't had to market, really,” added DeMarce (who, not coincidentally, was recently named Optimist of the Year by a local community organization). “People coming in and seeing it, it basically sells itself. It certainly hasn't been hard to fill.”

When asked for advice by owners who are considering an addition like this to their operations, many mentioned the importance of getting out and seeing what other centers are trying and understanding what a good fit for your facility will be.

“Do your homework and go with your gut,” said Taormina. “You know your community; you know your area. Also, be prepared to pivot. Whatever your initial budget is, raise it by 25%, if you're able.”

“Our owners are very involved in industry groups and bouncing ideas off of other owners,” said VanBuskirk. “Visit other locations when you're traveling and talk to them and your vendors and see what's working. There are so many different Facebook groups for FEC operators that are great resources for learning what's worked and what new trends are out there. Nothing's going to be perfect, but you'll be better set up if you do your research.”

Doty described the way Andy B's customers talk about their experience as being incredibly rewarding, which can come as a huge relief for owners who are anxious about how their VIP offerings will be received.
“This is a way to really get guests talking, loving the upgraded bowling experience, and ultimately becoming a guest for life,” she said.

Glitz has come to our gutters, and if the success of these and other centers is any indication, it's here to stay. Many could never have envisioned a world where velvet ropes are an integral part of the modern bowling experience, but folks said the same thing about electronic scoring and craft cocktails.
Savvy operators are leading the way for the VIP bowling experience, and customers are eagerly walking down that red carpet (wearing their rented shoes, of course) along with them.