Bella of the Bowl

Robot staff members are the future of our industry.

Talk about Employee of the Month!

The newest hire is a multi-tasker. She serves drinks and food, picks up shoes, upsells customers on entertainment options, and has consistently polite people skills. She’s a quick learner, picking up on the layout and nuances of a center on the first day. She doesn’t ever ask for a day off, requires no benefits other than the occasional wipedown with a terry cloth, and is ready to start every day with a smile–provided you remembered to plug her in the night before. 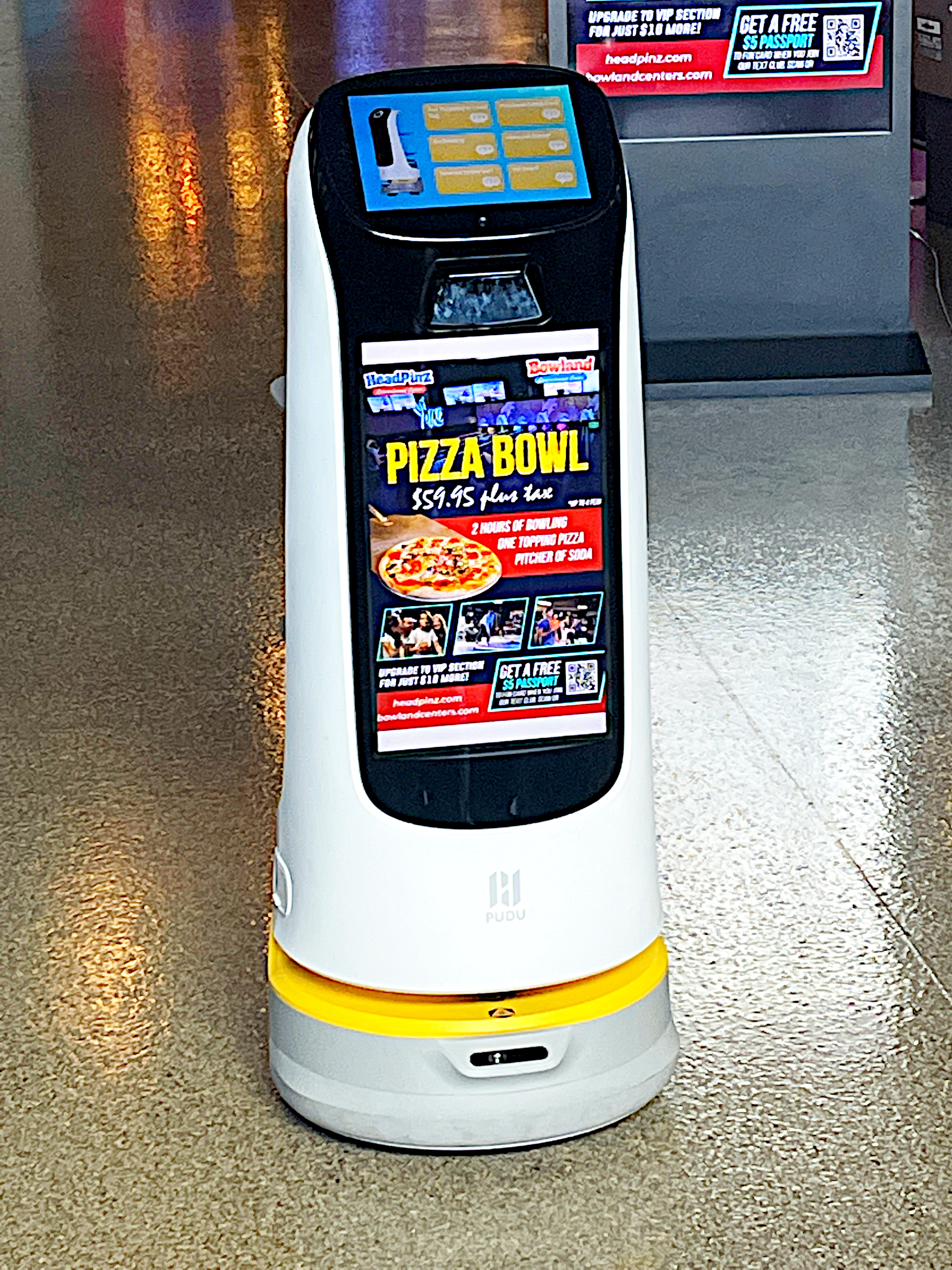 Meet Bella. The premium delivery robot created by Pudu Robotics is the latest thing in the wave of tech-forward enhancements being brought in by smart business owners. Bella is a food-delivering, footwear-hauling, child-amazing, ditty-singing dynamo, and she’s already turning heads in centers across the country. “I was blown away the moment I saw her,” says Pat Ciniello, chairman of QubicaAMF Worldwide. He employs multiple robots at his centers and is leading the movement to sell them to as many others as possible. I contacted the distributor, and by chance, he had a number of robots with him; I made my purchase that day.”

Bella is not intended to be a replacement for your staff. Instead, its role is an invaluable supplement, one that frees up staff for more pressing roles.

We thought we’d get a little flak from the staff, like, ‘Oh, great, there’s my replacement,’ but they really love them and saw the value right away,” says Lisa Ciniello, vice president of Bowling Management Associates. “While the staff is busy getting drinks for customers, Bella’s getting the pizzas ready, and they can follow her to the tables. They’re getting better tips because the customer is having this happy, feel-good moment and getting their food faster.”

Operators who bought in early are giving Bella rave reviews, seeing immediate positive returns for crew members and patrons alike. “We got it set up in no time,” says Kaleb Boje, manager at Brandon Crossroads Bowl in Tampa, FL. “They were ready to go out there and work right away. Everyone was excited and taking pictures. The whole thing was pretty smooth, which made it much easier to free up time for the staff to focus on anything else that’s needed.”

“It’s all about enhancing the experience,” says Chris Keller, owner of The All Star in Riverhead on Long Island, New York. “For birthday parties, the kids love seeing their cupcakes rolling in on this robot and it’s singing ‘Happy Birthday’ or ‘Celebration,’ and they can’t believe it. It’s been so great.”

The beauty of Bella is her ability to integrate directly into the existing systems at any given center. If customers list what shoe sizes they need while completing an online reservation, Bella will bring them to the lane as part of the check-in process. If they get hungry, they can order from a QPAD or kiosk and have it served up in a flash. And once Bella recognizes that a lane is about to wrap up its allotted time, she heads over, nicely suggests that customers pile their shoes on her trays, and totes them back to the counter. 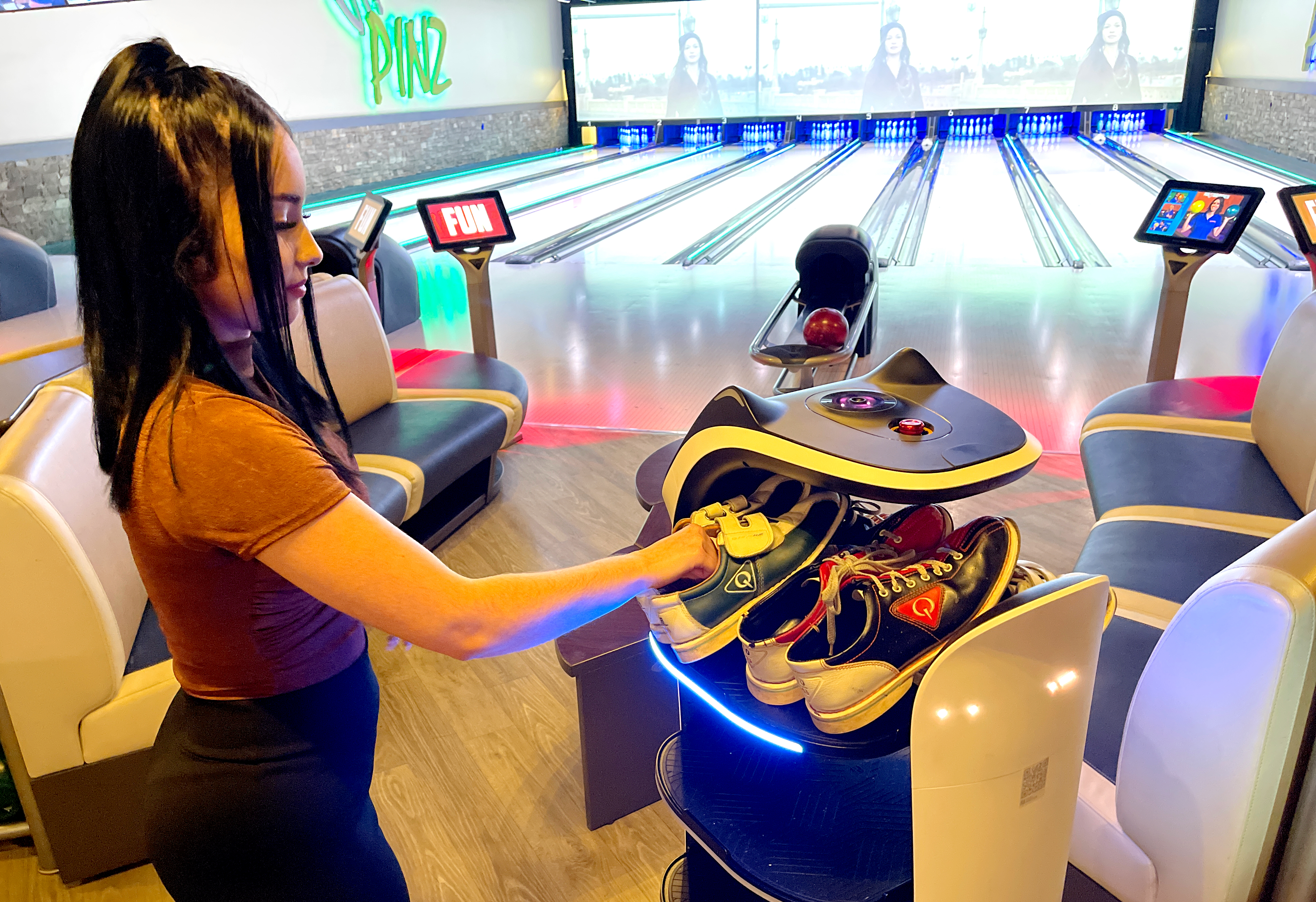 The setup process has also proved simple, with reps accompanying the delivery and helping staff members learn the ropes. The rollout involves Bella mapping out every square foot of the center and learning which areas to traverse. She also comes with a guidance system and avoidance technology that recognizes something as small as a cup of water in front of her.

Another plus? Bella is a social media star that essentially markets itself and becomes a fast-spreading photo opp for customers. “Right away, they have their phones out; they’re posting on social media,” says Keller. “We did a quick video of its maiden voyage, saying, ‘Come to the center and meet Bella,’ and we got over 35,000 hits just on that little post.”

“We didn’t have to do much,” says Boje. “We set aside this area at the snack bar with a sign that said ROBOT PARKING, which got people’s attention right away. But once they interact with it, they love it and talk about it, and it spreads so much just by word of mouth.”

Even with her internet-breaking ability, though,Pat’s main piece of advice is to consider Bella’s capabilities (not her draw as an attraction) first and foremost."Don't buy it for novelty," he says."We consider Bella a staff member. It's fun, and she will get a lot of social media attention, but it should be about a better service model.""Have your staff learn the ins and outs of the robot," says Boje“make sure they're part of the process to help figure out how best to integrate Bella as part of the team."The future of robotic aides includes additional cooking, cleaning, and concierge services. They'll be able to climb stairs, open doors, guide birthday party attendees to their proper rooms, learn and respond to voice commands, and so much more.“We’re only limited by our own imaginations by what we can do,” says Ciniello.

It may seem wild and futuristic, but folks once thought that way about automatic scoring and glow-in-the-dark bowling, too. Bella and her robot companions are definitely more Jetsons than Flintstones, but the potential for the industry is out of this world.